One of the mildest and perhaps the most efficiently well-tolerated anabolic steroid on the market Oxandrolone has become very popular among performance enhancers, especially in the female community but remains a staple in the treatment of many muscle wasting diseases. Originally developed in 1964 by Searle Laboratories, (absorbed by Pfizer in 2003)the same manufacturer who brought us other well-known items such as Celebrex, Ambien, Dramamine and NutraSweet, Oxandrolone hit the shelves under the trade name Anavar and has been a favorite of many ever since. While Anavar is not a very powerful steroid, milligram for milligram it is one of the weakest ever made, it holds the distinction as being the most side-effect friendly with the strong majority of effects being only of a positive nature. 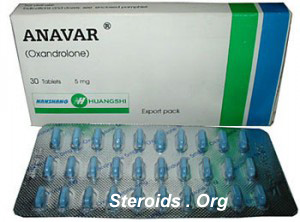 A member of the Dihydrotestosterone (DHT) family, Anavar is comprised of the active hormone Oxandrolone and possesses only a very slight androgenic nature; so slight it is almost non-existent but it is with its mild anabolic nature that many find use for this particular hormone. By design Anavar is a C17 alpha-alkylated (17-aa) anabolic steroid simply meaning the 17th carbon position has been altered in order to allow the medication to survive the first pass through the liver; without the 17-aa characteristic the medication would prove to be useless, as is common with most oral anabolic androgenic steroids. However, by its design Anavar is able to survive ingestion and enter into the blood stream where it becomes active and performs its varying functions within the body. As the 17-aa alteration is necessary for the hormones survival it is not without its disadvantages as this slight alteration is toxic to the liver; however, it is very important to note the toxicity of a particular 17-aa steroid will vary from one to the next and in the case of Anavar we have a 17-aa of a very mild toxic nature. Anavar is so mild in-terms of liver toxicity most who supplement or medicate with the Oxandrolone hormone experience little to no increases in liver enzyme readings during their period of use and any elevation will generally return to normal once use is discontinued.

As an oral anabolic steroid, once ingested Anavar becomes active within the blood very rapidly, as is a very common trait among most oral anabolic steroids and especially those who carry with them a DHT nature. While initial activity is very fast total active duration is consequently very short as Anavar only possesses a half-life of approximately 9 hours making frequent dosing a necessity. With a 9 hour half-life most will find a twice daily administration of the hormone to be optimal if peak levels of the hormone are to be maintained within the blood. No, twice daily administration is not an outright necessity, once daily can still provide many benefits and many women whose doses will be fairly low often opt for this route, as well as many clinical patients. However, it is when we enter the world of male performance enhancement that multiple dosing per day proves to be more efficient, especially when we consider most men require a large amount to reap any reward.

The Benefits of Anavar:

Perhaps the greatest benefit revolving around the Oxandrolone hormone is its ability to treat muscle wasting diseases such as aids as it will greatly stave off muscle disintegration that is both common with such ailments and often one that causes a devastating end. Anavar can also be very useful in the treatment of burn victims enabling them to regain lost tissue but in some cases it may prove to not be enough and stronger anabolics are needed. While its medical purposes remain very simple, in the world of performance enhancement Anavar is not so cut-and-dry; in-fact, for the male performance enhancer looking to bulk up in size this is perhaps the last option he should ever consider. No, Anavar will not provide massive piles of muscle but what gains in size it does provide will be pure lean tissue and if you understand anything about performance each pound of lean tissue is worth its weight in gold. Even so, in the world of performance enhancement Anavar holds distinct qualities in both men and women but in many ways it is women who benefit the most, so much so in many circles it is often referred to as The Girl Steroid.

Without question the greatest benefit to the Oxandrolone steroid is within its ability to preserve lean muscle tissue while simultaneously increasing total metabolic activity. With that in mind one can easily gather that during dieting or when intense activity is a regular basis this will be when the hormone proves to be the most useful. Anavar by its very nature greatly preserves lean tissue and as hard dieting often risk the loss of such tissue this trait is invaluable. Further and of equal importance, the Oxandrolone hormone actively increases metabolic efficiency, meaning the rate in-which we burn fat will be increased. These two primary effects prove to be very useful, especially when we consider them in total conjunction, for example:

While Anavars metabolic and tissue preserving qualities are truly great, when we examine the hormone we can hardly say these are the greatest traits of all. Beyond a shadow of a doubt it is the hormones function within the female user that is such a welcomed one; so much so we will discuss it in detail in its own section below.

The Side-Effects of Anavar:

Anabolic Androgenic Steroids carry with them the potential for negative or adverse side-effects, this much is true but when it comes to Anavar the potential is low, very low. It is important to understand, Potential does not mean guaranteed, it does not mean the likelihood is great; it simply means a possibility exists and this is the case with all medications of every nature; when you buy anything at your local RX, from cough syrup to Aspirin and everything in between there is a potential for negative side-effects.

As it pertains to Anavar not only is this steroidal hormone very side-effect friendly, as is with most anabolic steroids side-effects are largely avoidable when responsible use is implored. As abuse or mega dosing often increases risk ones sensitivity to the hormone also plays a large role and this is true with all things in life; some people cant take Tylenol because it makes them sick, other take it every day; some people cant eat eggs or they become deathly ill, while others eat eggs every single day.

When we look at the side-effects of anabolic steroids in general the first thing we notice is most are estrogenic in nature and this is due to the conversion of estrogen in the body brought on by the presence of the active hormone. If youre supplementing with Anavar there is good news, Anavar does not possess this trait, meaning, there is no estrogen conversion and such related side-effects are non-existent. Why is this important? Because there is no conversion process or what is better known as the aromatase process there is no risk in Gynecomastia, water retention, there are fewer risk in-terms of blood pressure and cholesterol and to top it off only a mild suppression of natural testosterone production. As we understand anabolic steroids suppress natural testosterone production, many suppress it to such a strong degree that its non-existent when the hormones are being used. Keep in mind, while Anavar does not suppress testosterone greatly it still suppresses it and if a man were to supplement with Anavar for the purpose of performance enhancement he will necessarily supplement with quite a bit thereby decreasing natural testosterone production quite handedly.

The Girl Steroid is this really a true or fair name? Sure, men can supplement with Anavar and do so successfully but when we consider the limited nature of anabolic steroids women can use and how well they tolerate and respond to Anavar then absolutely The Girl Steroid is the perfect name. The majority of anabolic androgenic steroids have strong virilization effects when taken by women that can range from deepened vocal chords, body-hair growth and clitoral enlargement to name a few. Obviously these are not welcomed traits as they are in the face of a womans very femininity but with Anavar these traits simply do not exist when responsible use is implored; in-fact, most all women will find the steroid to be side-effect free.

As it is so well-tolerated many female athletes around the world supplement with the hormone but unlike men many women have found a very suitable bulking agent in the Anavar hormone; while mild most women simply require a lessened boost if you will to see phenomenal gains. However, it is in the world of competitive physique sports that is perhaps this particular steroids greatest and most welcomed home, as it is not only a favorite but in many cases an outright necessity to the majority of bodybuilding, figure, fitness and even many bikini competitors.

While Anavar will never be our primary recommended steroid for most men they can use it successfully and it can be quite useful especially when dieting; however, due to its mild nature most men will require a large amount and as it is one of the more expensive steroids on the market this can prove to be often inefficient. In any case, most men will find 50mg per day to be the perfect starting point and in most cases this should be viewed as a minimum dosing but the majority of men will reap very little reward until they approach 80mg per day. Keep in mind, Anavar normally comes in 10mg tablets and often $2 per tablet is considered a good deal; as you can see, this can get very expensive.

As we have discussed women are far more sensitive to the steroids attributes and therefore require far less; most women will find 10mg per day to be the perfect dose and often all the Anavar they ever need with 20mg being a good rule of thumb in-terms of maximal dose. While 20mg can be used safely we do not recommend you start there as while side-effects may indeed be very mild its always best to play it safe; besides, if you can get all you need out of 10mg then upping the dose proves to be pointless and simply a waste.

In either case, both men and women, Anavar can be used for far longer than most oral anabolic steroids due to its low liver toxicity rating and further as it does not appear to taper off in benefit as fast as many other oral anabolic steroids. The majority of Anavar users will supplement for 6-8 weeks but longer durations of 12 weeks are not uncommon, especially during female contest preparation time. Keep in mind, the leaner you are the greater the results will be, meaning, they will be far more pronounced; for this reason most women will choose Anavar during the latter half of their diet to reap the greatest reward.